It's the first Sunday State of Origin in 17 years - and NSW is set for a Rugby League celebration on 24 June.

As the Brydens Lawyers NSW Blues prepare to wrap up the series on their home turf, NSW fans are encouraged to take in all there is to offer on Origin day, with a major build-up expected ahead of Game Two's kick-off at 7.40pm.

From the SMARTWiG extravaganza to the NEW Sheds and the Wheelchair Rugby League Interstate Challenge, there's something for everyone in the lead-up to the big game.

There's only one way to take in all the action if you're a NSW fan - as part of the Blatchys Blues. Secure your seas in the sea of blue here.

Soak up the NEW Sheds

The centrepiece of the pre-game party will be at the NEW Sheds, with fans expected to flock to Cathy Freeman Park from as early as 3pm. With a monster marquee, a 50-metre bar, live music and visits from NSW legends, it's the perfect place to settle in ahead of our monumental Origin battle.

Steve Menzies, Nathan Hindmarsh, Steve Roach and Laurie Daley will join host Gus Worland on stage, while fans can pick up their Blatchys Blues SMARTWiGs and limited-edition NSW Tooheys New cans. Entry is free and all fans over the age of 18 are welcome.

Watch on at the Wheelchair Interstate Challenge

Three big interstate clashes will feature throughout the day before the big one at 7.45pm - and one of those represents a first on NSW turf.

The Wheelchair Rugby League Interstate Challenge has been contested over five matches since its inception in 2015, but makes its way to Sydney for the first time this year. Taking place at the Quaycentre - one of Sydney Olympic Park's indoor sports arenas situated just 100m from ANZ Stadium - the NSW Wheelchair Rugby League team is hoping to enjoy some strong support as they look to continue their unbeaten run against Queensland.

A curtain-raiser will get the action underway at 2pm, before the interstate contest takes place at 3.30pm. Entry is free and fans of all ages are encouraged to witness the brutal and entertaining sport of Wheelchair Rugby League.

After State of Origin it's one of the most anticipated interstate clashes on the Rugby League calendar - and in 2018, the ledger is perfectly squared in the State Residents Game.

After a 36-6 defeat in 2017, the Guy Missio-coached NSW side will aim to regain the Residents' shield when they kick-off at ANZ Stadium from 4.10pm, in the curtain-raiser to Origin II. With gates opening to all ticket holders at 3.45pm, fans can enter the venue early and watch some of the representative and NRL stars of the future.

Take in the State's Tertiary Talent

Before the Wheelchair Rugby League and Residents interstate clashes, the state's best university players battle it out in Sydney's West.

Kicking off at 1pm at St Marys Leagues Stadium, NSW Universities will host Queensland Universities in a bid to put an end to a three-game losing streak. Coached by Drew Dalton and selected primarily from the NSW Tertiary Rugby League, the home side includes talent which has also featured in the Intrust Super Premiership and other senior grades this year.

For Western Sydney-based NSW supporters, the match is a good way to start what will be a monster day of interstate games.

Jet to the Stadium Early

If you've decided to head to ANZ Stadium after the State Residents Game, you won't want to arrive much later than 6.45, when a pre-match spectacular wows the crowd.

Australian rock band Jet will headline the show, performing a number of their classics alongside fellow Aussie acts The Rubens and Kingswood. A big audience is expected to flow into the venue in time for the concerts, with an electric atmosphere expected.

Light it up in the Blatchys Blues

Before the main game kicks off, the Blatchys Blues come alive with a display which will be a highlight of the ANZ Stadium crowd.

Thanks to The Star, all Blatchys Blues will receive a SMARTWiG2 - the upgraded SMARTWiG with a more comfortable radio device and 20 new LED lights. The improved lighting display will ensure the NSW faithful stand out from the crowd at the northern end of ANZ Stadium throughout the game, starting with a pre-game show when the stadium lights are switched off.

Whether or not you can get to the game, make sure you follow the NSWRL's social media coverage throughout the day and into the night. Don't miss a thing as we bring you all the latest from Brydens Lawyers NSW Blues camp, before covering the game from 7.40pm.

Leave the Car at Home

We're expecting a full house at ANZ Stadium, so make the most of FREE transport options to and from Sydney Olympic Park.

All tickets to the game include entry and return travel on Sydney Trains services, Sydney Olympic Park Major Event Buses, regular Sydney Buses (STA) services and Sydney Ferries services. Fans who have not pre booked parking should leave the car at home and take advantage of the additional and direct public transport services available for the event. 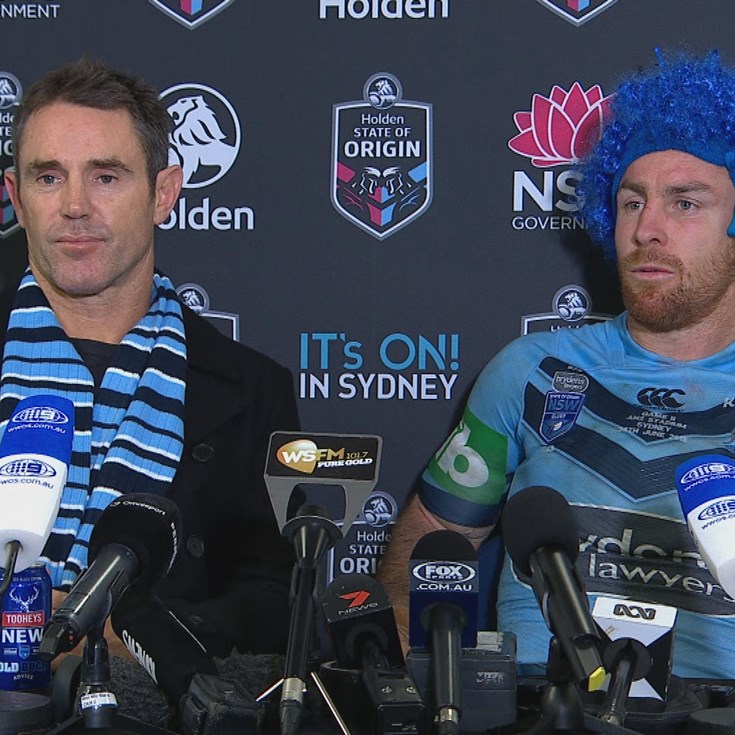 You Can't Clock Off: Vaughan