The Canterbury-Bankstown Bulldogs have overcome a late scare to defeat the Warriors 30-18 in their Round 20 clash at Belmore Sports Ground.

With second-rowers Lachlan Burr and Chris Smith having their moments and Zac Woolford again strong for the Bulldogs, the win sees Steve Georgallis' men remain in 5th place on the Intrust Super Premiership ladder for now, while the Warriors remain on 20 competition points.

The Bulldogs were certain to have crossed in the early minutes of the contest, with Josh Cleeland steaming through a gaping hole close to the Warriors line - but the try was too good to be true, with an obstruction ruled.

A grubber was sent dead by Mason Lino in the ensuing set, providing the Bulldogs with seven tackles - an opportunity they made the most of. Zac Woolford, darting and grubbering from dummy-half on the last, would then be the beneficiary of a Hayze Perham fumble to score his side's first four-pointer.

Cleeland's conversion attempt sailed wide, but the home side soon began to build pressure and earn a penalty in front of the posts. A ruck infringement involving Chris Satae gave Cleeland the chance to add the extra two points for the 6-0 lead.

The visitors would soon hit back, however, in what can only be described as a soft try for James Bell. The Warriors captain took a short pass from dummy-half Sam Cook, getting past Cleeland and Lachlan Burr to cross untouched. With the conversion, scores were locked up 23 minutes into the game.

Next, a simple right-side movement brought the Bulldogs a second, with Cleeland and Josh Bergamin combining to send Tom Carr over in the north-eastern corner. The conversion attempt from out wide was waved away.

Penalties and errors were a feature of the remainder of the first half, while second-rowers Burr and Chris Smith both coming up with strong runs which could have resulted in points. Carr, too, had a good chance to get a second in the Bulldogs' last-ditch effort on the stroke of half-time, but they would go into the sheds leading 10 points to six.

The Bulldogs resumed play in the second half with the same energy as the first, with Carr once again a likely tryscorer. The home side was disappointed not to have scored via the winger, however, when a cross-field kick was ruled to have been taken simultaneously by Carr and opposite number Junior Pauga, despite Carr grounding the football.

Soon after, the Bulldogs would be awarded back-to-back penalties on the Warriors' line, opting to take the shot at goal, which was missed by Cleeland. The follow-up set again could have brought points for the Bulldogs, but a short ball from Bronson Garlick to John Olive went forward.

It seemed inevitable that the Warriors would eventually make the Bulldogs pay, which they did via rampaging forward Pat Sipley, who singled out Bergamin and Jesse Martin to crash over in a one-out play. Chanel Harris-Tavita made no mistake with the boot to give his side the lead for the first time.

As the game reached the three-quarter mark, a costly mistake from Bell would gift the Bulldogs a try. A knock-on from the captain was cleanly scooped up by Cleeland, who raced 20 metres to score untouched, successfully converting for a 16-12 score line.

Their third try might have been a simple one, but the Bulldogs' fourth, in the ensuing set, was enough to get the Belmore crowd to their feet. A Renouf To'Omaga offload sparked the entertaining try, with Morgan Harper then finding a flying Tom Carr, who outpaced Pauga for a second. With Cleeland converting from the sideline, the home side opened up a 10-point lead.

After Tom Ale stripped the ball from Josh Cleeland 20 metres out from his own line, the visitors enjoyed repeat sets in good field position, eventually cracking the defence with a dummy-half run from Cook. The Warriors No.9 eventually muscled his way past Bergamin, before Harris-Tavita converted.

Time was not on the Warriors' side, and they needed a strong set after points to continue to apply pressure - but a miscommunication from the restart allowed the ball to bounce dead. Given a golden opportunity, second-rower Chris Smith put forward a strong run to bump off Matiu Love-Henry and Perham en route to the try line.

With Cleeland converting and the Warriors' next kick-off going out on the full, the Bulldogs were to hold on for the victory. A late penalty awarded to the home side allowed them to extend their lead further, with Cleeland kicking the penalty goal for the 30-18 victory. 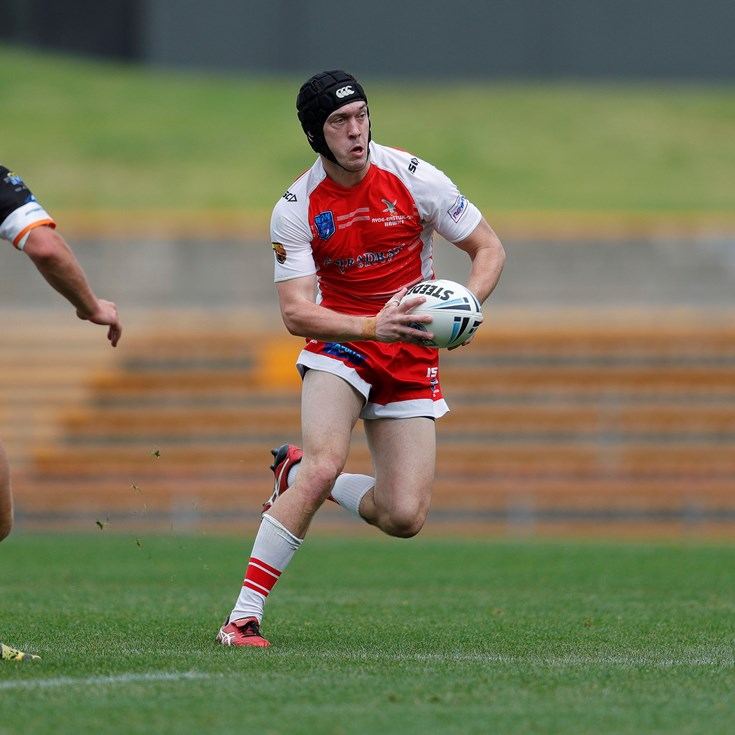