A mock interview in the South Sydney boardroom with CEO Blake Solly and GM of football Shane Richardson has left Rabbitohs officials with no doubt lock Cameron Murray will be well prepared for his State of Origin debut.

The “grilling", which was a rehearsal for an interview Murray had for a scholarship with Macquarie Bank, is an indication of how thorough the 21-year-old is about everything he does on and off the field.

As Macquarie executive Guy Reynolds said of the NSW rookie: "He is a young bloke but he has got an old head."

Murray is the first NRL player to receive a scholarship through the Macquarie Sports Foundation, which has had more than 40 rugby union graduates since 2003, including Kurtley Beale, Rob Horne, Ben McCalman and Paddy Ryan.

The scholarship provides Murray with access to mentors across Macquarie Bank’s raft of businesses for 10 years and the opportunity to work for the company during the NRL off-season.

“It’s an investment bank so it is all high level stuff,” Murray said.

“For example, they’ve got an air finance sector where they buy, sell and lease planes to different businesses.

“It’s a pretty intimidating environment going from professional sport to something like that but it just gives you an idea of possible opportunities for life after footy.

“It stimulates your mind and it’s good for my balance because it is something outside of footy that I really enjoy.”

Murray learned about the scholarship from Souths player and wellbeing manager Luke Kelly and submitted a resume with a list of his sporting achievements, an academic transcript and a 300-word application detailing why he would be a worthy recipient.

After being offered an interview, he met with Richardson, Solly, Kelly and Rabbitohs head of football operations Brock Schaefer and they decided to help him prepare by organising a mock interview.

“We did that in the board room before he went off for the actual interview and Blake and Richo grilled him with some hard hitting questions to give him an idea of what to expect,” Kelly said.

“He went pretty good and he ended up getting the scholarship, which is a testament to him. He works very hard off the field and he is a real leader around the club, especially for his age. He was quite excited and so was the club.”

Murray, whose father Corey also played for the Rabbitohs and whose sister Bryanna is a member of the club’s Harvey Norman NSW Women’s Premiership team, is considered a future leader at Redfern.

Reynolds, who has been mentoring Murray, said he demonstrated a similar work ethic away from the game.

Walker opens up about his long road to Blues selection

“He was only due to come in for four weeks but I think he worked maybe 12 weeks on and off.

“He has a real love of the property market and the financial markets so we split him between the internal property markets and treasury, equity and foreign exchange markets. He was bloody good, he is pretty sharp and he has got an amazing consideration of numbers.

“He has a great authority with people here, he is very respectful and he individually rings people after he has left the jobs and says thank you so he has made a big impression across this place.”

During the last off-season, Murray visited the Tiwi Islands where Reynolds and former cricketer Matthew Hayden have established the Tiwi College Project.

Great fun up north with some absolute legends 🙌🏼

The Tiwi Islands has one of the highest youth suicide rates in Australia, and Murray spent a week delivering messages about health and education to Indigenous communities.

“Macquarie run a sports program where they go out to rural and Indigenous communities, and I saw what is almost a third world country compared to where we live so it was a good eye-opener,” Murray said.

“It is stuff like that that keeps you on track. A bit of study and a bit of community work keeps you grounded and it is something I enjoy too.”

The former Newington College rugby union captain has been playing league since he was four years old and fell in love with the code after his father Corey, who played 12 games for Souths, took him to his first training session with Mascot.

Bryanna only took up league recently but has advanced from the Under 18s Tarsha Gale Cup team to first grade for the South Sydney women’s squad.

“She played before us a couple of weeks ago at ANZ Stadium so I got to see her first half there and she is doing well,” Murray said.

“Dad played for Souths too so it is all the in the family now.

Maroons have GI in their minds

“I could have played rugby union but I grew up in a rugby league family, rugby league was always on the television when I was young and it’s all I ever wanted to do.”

He is one of three members of the 2016 NSW Under 18s team coached by Brad Fittler selected for the June 5 series opener at Suncorp Stadium but on his first day in camp Murray said he would approach his Origin debut “like just another game”.

“I think if I tell myself that this is the biggest stage in rugby league or possibly Australian sport, with a couple of million people watching, I might get a bit distracted,” he said. 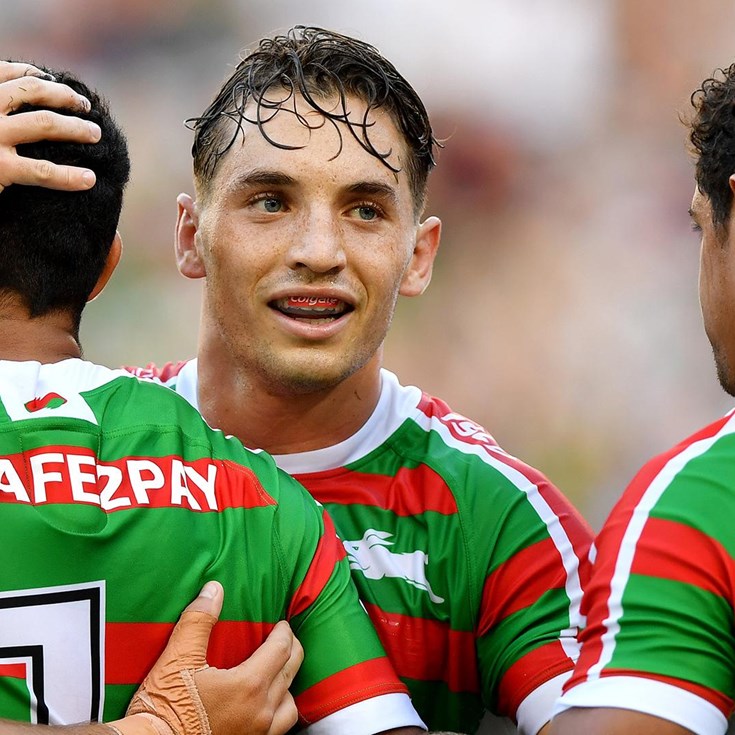 Reynolds backs Murray on the edge

You can play him anywhere: Fittler backs Murray to adapt