If I could offer some advice to the three Blues rookie that will come off the interchange bench in the Origin series opener it would be to urge them to conserve energy.

Queensland have picked a stronger side than I was expecting after we'd started to hear about all their injuries over the last few weeks and players needing to be picked out of position and so on.

There is a strong chance the game will be in the balance when the bench players start coming on midway through the first half and the bench is an area where I think the Blues have a definite advantage.

I don't see that being the case this year.

In Payne Haas, Cameron Murray and Jack Wighton, they have the speed, skill and agility to change the tempo of the game.

An in-depth analysis into Origin I

The Blues bench has been picked to make an impact and they'll do that.

Being able to make that impact comes down to preparation. That includes during the week and then on game day from the bus to the ground and during the warm-up.

The first thing those guys should have been doing is taking advantage of being in camp with some of the best players in the game. They should be looking at guys like Boyd Cordner, James Tedesco, David Klemmer, Jake Trbojevic and Tyson Frizell and how they prepare.

Coming into Origin camp was always a huge opportunity to add something to your game by being around the best players who you don't get to train with week-to-week. You're not going to have as good and as intense a learning opportunity anywhere else.

I used to love going in and watching Joey Johns, Freddie Fittler, Mark Gasnier and Matt Cooper and all those guys. As a benchie, you're not always in the play at training and you can watch them and see what you can take and copy and add to your game. It's a tremendous opportunity to enhance your skill set.

For Jack Wighton in particular, he's been picked as the utility and has NRL experience at fullback, five-eighth, wing and centre and he won't know where he'll be playing when he gets on the field.

He should be learning as much as he can about as many positions as he can while he's there.

The other key is game day. Origin is an intense arena with a lot of build-up and your heart rate starts picking up just getting on the team bus – so it's important to keep all that in check so you don't burn too much energy.

I used to really try and consciously relax as much as I could on the bus on the way to the game.

The starting players really start to build into it leading into game and it's hard not to get carried away with the excitement, enthusiasm and intensity the starting team is warming up with.

When I was younger I tried to get as amped as they did but you can burn a lot of energy doing that so as I got more experienced I thought of myself more as one of the trainers in that warm-up.

I'd hold the bags as they go into contact and try to not burn too much energy and after we came together as a team, walking down the tunnel is when I'd psychologically start to switch on and get the heart rate up.

It's important for them to have a chat to Freddie about when they might go on.

Obviously, you have to be prepared to go on after one minute if there's an injury or something left field happens but it's more likely you'll go on according to what the coach's plan is so I'd work backwards from there.

Starting the game from the bench can also be a tremendous advantage to get an insight into how the game is going. It's not just the best seat in the house to watch Origin – it's a chance to scout Queensland players.

In Payne Haas, Cameron Murray and Jack Wighton, they have the speed, skill and agility to change the tempo of the game.

Craig Wing on the rookies on the NSW bench

Those players would be my targets as soon as I got on the field.

I would seek them out straight away because I had the fresh legs. You have to use your position on the bench as sensibly and strategically as possible. It's a vantage point to work out how you can play your game to be most effective.

These debutants will go out and be super pumped up and wanting to run through brick walls. Origin is so much quicker than anything else and can suck a lot of energy out of you.

It flows more, there aren't as many errors or penalties or kicks for touch or stoppages. It's very, very fast.

How Vaughan’s baby girl is inspiring him to Origin success

My advice for the new guys is not to focus so much on the first run or tackle – think ahead about that moment after you've been out there for 10 or 15 minutes and the early adrenalin has worn off and your head is spinning and you can't breathe.

That is the real Origin. Everyone remembers that explosive first hit up which is always in the highlight reels but the real Origin is played when you're fatigued, the lungs are burning and you don't know how you're going to get through the next play. 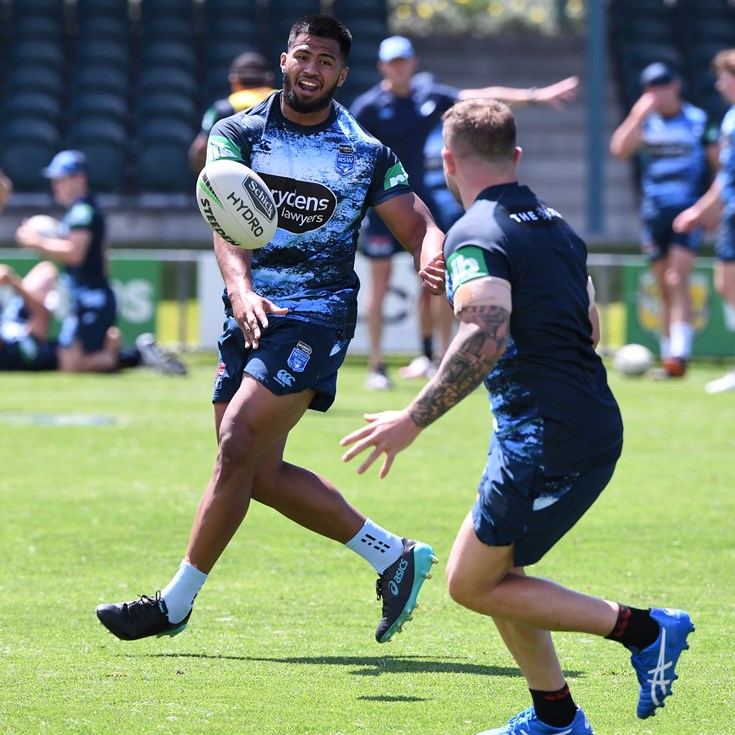