All the best action from Round 2 of the NSWRL’s junior representative competitions.

Benaiah Ioelu’s Central Coast Roosters have managed their second win for the season in dramatic fashion after the hooker scored a first half hat-trick in the opening 20 minutes of play against Canterbury-Bankstown Bulldogs.

Ioelu scored the opener in the fourth minute when he crashed over beneath the posts before the Bulldogs hit the front through five-eighth Brooklyn Taumata. The lead was short-lived as Ioelu crossed the line on two more occasions with an additional two of three conversions from No.6 Haydan Ritchie bringing the halftime deficit to 16-6.

The Bulldogs staged a late fightback with tries for Taumata and second row forward Lajuan Vito in the final 11 minutes but Central Coast held on for the two-point win to remain undefeated in the 2021 UNE Harold Matthews Cup.

Click here for other results from the UNE Harold Matthews Cup.

The Monaro Colts have had two successful outings against NMR Knights in the SLE Andrew Johns and Laurie Daley Cups on Saturday with scores of 26-4 and 18-16 respectively.

Hosting the Knights from Workers Arena in Goulburn, the Colts’ Johns Cup side took an early lead just two minutes into the contest through five-eighth Blake Hovi and scored four more unanswered tries on the way to a 22-point win.

The Laurie Daley Cup clash was a back-and-forth encounter that saw the lead change hands five times. The Colts ultimately had the final say when fullback Ty Dowdle latched onto a late offload from No.11 Keegan Kenny before captain Mitchell Evans’ conversion sealed the win.

Click here for other results from the SLE Andrew Johns Cup.

Click here for other results from the SLE Laurie Daley Cup.

Following an opening round bye, 2019 premiership winners the Illawarra Steelers have begun their 2021 Harvey Norman Tarsha Gale Cup season with a 10-4 win over the Sydney Roosters.

Fullback Teagan Berry was again at her best to start the year when she raced through the defensive line to dive on halfback Riley Scott’s grubber kick for a try in the 17th minute.

The Roosters evened the score-line in the second half when back-rower Jasmon Tupou crossed but it was Steelers five-eighth Keeley Kopara who took on the blindside eight minutes before fulltime for the match-winning try.

Click here for other results from the Harvey Norman Tarsha Gale Cup.

Panthers back on track with Round 2 turnaround

After suffering a first round defeat at the hands of South Sydney in the UNE SG Ball Cup, the Penrith Panthers’ campaign is now underway following a 64-10 win against St George – marking a 76-point turnaround from last week’s 32-20 loss.

Five-eighth and captain Connor Mason starred for the home side with three tries and 10 from 11 conversions to record an individual total of 32 points.

Click here for other results from the UNE SG Ball Cup. 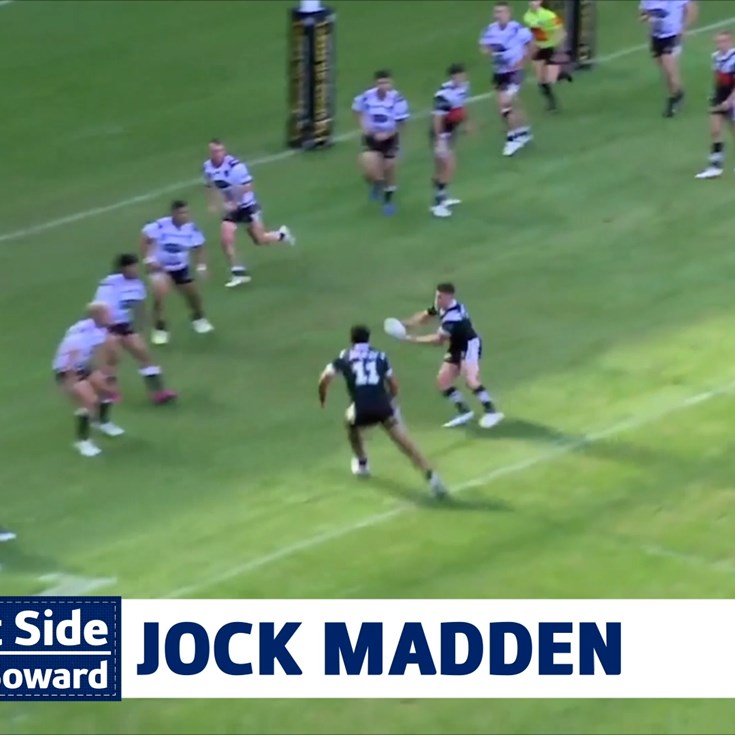 The Short Side With Jamie Soward | Round 10